Alcohol Misuse and Abuse in Massachusetts

The Consequences and Costs of Underage Drinking

In 2013, underage drinking cost the residents of Massachusetts $1.3 billion in medical costs, work loss, and costs associated with pain and suffering. Broken down, this represents a cost of $1,834 per youth each year, or $3.48 for every drink consumed by an underage youth. Even if we consider only tangible costs (property damage and criminal justice costs, as opposed to pain and suffering), the total still comes to $384.9 million each year, or $1.13 per drink, whereas a drink retails in Massachusetts for $1.01.1

The Underage Drinking Enforcement Training Center at the Pacific Institute for Research and Evaluation, funded by the Office of Juvenile Justice and Delinquency Prevention (OJJDP), looked at the various harms related to underage drinking in Massachusetts:2

In addition, an estimated 18 traffic fatalities and 1,051 non-fatal traffic injuries in 2012 were attributable to driving after underage drinking.2

Youth violence and car crashes comprised the largest costs for the state in 2013:

Use of Alcohol by Underage Youth

Underage drinking among high school youth in Massachusetts has declined significantly in the last decade. Findings from the 2013 Massachusetts YRBS:3

Ninth-graders were significantly less likely to report lifetime and/or current alcohol use than students in all other grades: 3

The rates for lifetime use, current use, and current binge drinking among Massachusetts high school students are illustrated below: 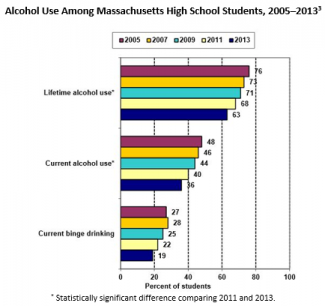 Findings from the 2013 Massachusetts YRBS:3

Rates of lifetime use, current use, and current binge drinking among Massachusetts middle school students are illustrated below: 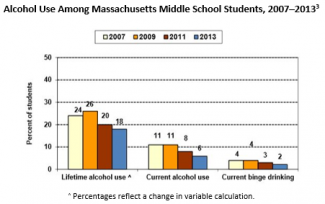 In 2012–2013, close to two in three (65.8%) of Massachusetts youth ages 12–17 perceived no great risk in drinking five or more alcoholic drinks once or twice a week.5 This is 5% higher than the national average: 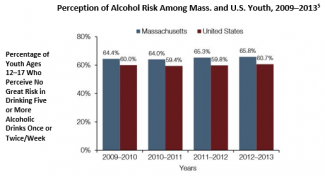