The Consequences and Costs of Underage Drinking

Underage drinking can have numerous consequences, including damage to the human brain, which continues to develop until around age 25:6

Underage drinking is also expensive. The problems associated with underage drinking—including youth violence, property damage, high-risk sex, fetal alcohol syndrome, and alcohol dependence and treatment—all pose a cost to our society and to taxpayers. The Underage Drinking Enforcement Training Center at the Pacific Institute for Research and Evaluation, funded by the OJJDP, studies the consequences of underage drinking and reports on its associated costs every year):2

The most costly problems related to underage drinking were youth violence and car crashes: 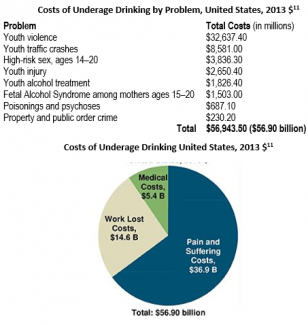 Read more on the costs and consequences of underage drinking:

Drinking is implicated in many deaths, injuries, and crimes:9

Alcohol use is also heavily implicated in crimes reported on college campuses:9

Given that many sexual assaults—especially acquaintance rape—are believed to be unreported, it is possible that alcohol figures into many more assaults than these studies indicate. (p. 62)9

Research has found that the earlier age at drinking onset, the greater the likelihood of being in a drinking-involved motor-vehicle accident, and that those who drink at earlier ages are more likely to have alcohol-related driving offenses before age 21.17

Although alcohol-related youth motor vehicle fatalities have decreased substantially over the past decade or so, “youth are still overrepresented in alcohol-related fatal crashes compared with the older population” (p. 60).9 Underage drinking and driving is a serious issue with dire consequences:

Use of Alcohol by Underage Youth

Lifetime and Current Use of Alcohol

The 2013 National YRBS found that underage drinking rates are decreasing:18

Findings from the 2013 National Survey of Drug Use and Health (NSDUH):1

Alcohol and Other Illicit Drug Use

The 2013 National YRBS noted a relationship between alcohol and illicit drug use:18

Age of onset was found to be a strong predictor of use of other illicit drugs. The National Longitudinal Alcohol Epidemiologic Survey found that “approximately one-half of persons who began drinking at age 14 or younger had also used other drugs illicitly in their lifetime, compared to around one-tenth of those who began drinking at age 20 or older” (p. 1).23 The younger a person is when he or she begins using alcohol, the more likely he or she is to use other drugs and to do so at an earlier age.17

The OJJDP reports that while “many factors can affect whether youth progress to the use of other drugs and which ones they choose to use,24,25,26 alcohol is frequently followed by tobacco, then marijuana, and then other illicit hard drugs” (p. 6).6

See Early Drinking Initiation and Illicit Drug Use: CESAR Fax for more on the relationship between alcohol and other illicit drug use.

SAMHSA defines binge drinking as having five or more alcoholic drinks within a couple of hours on at least 1 day in the past 30 days. The National Institute on Alcohol Abuse and Alcoholism is even more specific, defining it as a pattern of drinking that brings blood alcohol concentration levels to 0.08 g/dL, which typically occurs after four drinks for women and five drinks for men within two hours.

Underage youth obtain alcohol from a variety of sources, according to the 2013 NSDUH:1

The NSDUH looked at data from 2002 to 2013 regarding perceptions of the risk of alcohol use among youth ages 12–17. 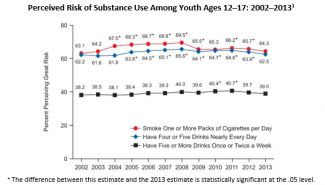